“Hard work gets you places. Never set out without the intention of getting dirty,” says old boy Dr Adam Barnes  as he reflects on his work in South Africa’s COVID-19 emergency rooms

“Anyone in the medical field can tell you that these challenges are unfortunately not new,” says old boy and doctor Adam Barnes.

Adam should know he has been hard at work in emergency departments dedicated to fighting the pandemic.

Adam says, “We have strange hours. We work long hours.”

According to Adam, “From the first year you start working as a doctor, you feel the exhaustion and you get used to it,”

Adam says, “What you quickly learn is that you are capable of more than you expect and eventually the long hours and the time away from family become the norm”

“It’s probably not right but it’s the way the system is built. I am acutely aware that I’m privileged to find myself in the position I am,” Adam says.

He explains that many of his friends cannot go to work at the moment due to job losses or , like him, have suffered from pay cuts.

In that sense, Adam says, apart from being in a relatively secure position, the stress of the unknown lingers.

He says what makes it easier is, “knowing that what I do at work is not just important for my own mental resilience but also that I’m helping people who desperately need me, in the moment,”

Beyond his experience as a healthcare professional, Barnes himself has tested positive for and survived COVID-19.

He says, “to be brutally honest ,and hopefully without sounding insensitive,my positive test result for SARS-CoV-2 was a blessing”

Adam hadn’t had leave since August 2019 and healthcare professionals currently aren’t in a position to take annual leave.

So although his symptoms were mild, he was able to take the time to break from the stress of work.

Adam says it was a great time to decompress.

“My symptoms didn’t get worse and I went back to work more optimistic, Adam explains.

He says the concern now is not knowing the virus well enough to predict immunity, “but time will tell. I’m hoping I can’t be reinfected but that possibility doesn’t change how I approach my work.”

Adam says team is essential in the work he has been doing.

“Anyone who thinks they can be independently successful is fooling themselves,” he states.

Adam says, “I can only do the things I do because there is someone standing to my side ready to correct my mistakes and guide me.”

Adam says he works with people who make him smile at the darkest of times.

“We see people at their worst, on their worst days,” and during the COVID-19 pandemic the anxiety is heightened.

He also explains that, “masks and visors hide our expressions from each other,” which he says, means, “patients can’t see that we care, and to make it worse, we no longer allow family members to be with patients.”

Under these circumstances Adam says to be able to stand with a team that can laugh makes all the difference.

Speaking about the type of person needed to do the work he does, Adam says emergency room doctors/nurses/associates need to have a sense of humour.

“We don’t take ourselves seriously, except when the moment requires it,” he says.

In addition, Adam says, “You need to be willing to adapt quickly when things go wrong and you need to think outside of the box.”

“I am often called out for not taking things too seriously,” Adam explains, “apparently the expectation of my profession is that doctors should lose their sense of humour but I don’t think you can do that without losing your humanity.”

“We’re all human, there’s nothing special about us,” Adam says.

Adam says that to work in an emergency department you need to be efficient with a smile.

“And obviously,” he adds, “you have to be okay with seeing blood. A lot of it.”

“I used to be the First Aid kid at WBHS,” says the emergency room veteran.

He says, “I sat on Bowden’s and told myself that I wanted to be a doctor.”

It wasn’t an easy path.

“I didn’t get into medicine when I first applied even though the back of my prefect’s shirt said “DR”. I didn’t get in the second time I applied either,” Adam explains, “or the third. It took me 12 years to become a doctor.”

12 years of tenacity, patience and resilience.

Adam says being a doctor, “is something I always wanted. Even if I was just putting a bag of ice on a sore knee, it felt good being able to help someone.”

He says that’s why it gives him a thrill now.

“Every time I make a difference in someone’s life, I know I am doing what I always wanted to do,” Adam says.

Adam has had to learn a lot “on the fly” during the course of his work and especially during the pandemic.

To current Westville Boys’ he says the best  way to do this is through reading.

“Knowing what to read is important,” he explains.

He adds that no one knows exactly what’s happening with COVID-19.

Adams says at the beginning of the pandemic, “when my emergency department was seeing some of the first cases in South Africa, we were managing our patients in a very different way to what we are doing now.”

Adam believes that in any field, becoming complacent is dangerous.

He says one can never assume that what they know is the only truth.

As such, “being willing to learn, discuss and adapt quickly are what makes you good at what you do.”

Adam explains that, “every day we are taking guidance from other doctors around the world who are learning with us.”

Adam emphasises that this is usually what happens anyway, even without a pandemic.

He says there’s no such thing as “being done” with learning.

“When I did my BSc and failed a course in my final year, I went back to UCT to complete it a year and a half later,”

Adam says that in that short time, structural biochemistry was taught in a completely different way, and the concepts had changed.

“I built on what I knew but quickly realised that knowledge is fluid,” Adam says, explaining that facts change.

“Always read, and motivate yourself to learn,” the doctor suggests.

He says, “you don’t have to study molecular biology but it is important to always push yourself in whatever interests you,”

Speaking about dealing with difficult situations Adam says, “it really depends on the situation.”

He says in a work environment, the medical side of my job is relatively straightforward.

Adam explains that everything is protocol driven which means the guesswork is removed.

“The real difficulty involves managing people when they are at their worst,” he says.

Adam says to manage those situations he tries to be empathetic.

He says, “It always helps to understand where someone else is coming from”

Adam says, “My opinion is not the only voice that matters. Often removing my own ego from a situation helps me to see the bigger picture.”

Where there is no clear cut structure to assist with a difficult situation Adam has a simple prescription.

“Accept that difficulty is transient.”

He says, “as much as the exciting and gratifying moments in your life are fleeting, so are the bad times. If you’re struggling, as tough as something may be, realise that you haven’t always struggled and you won’t be there forever.”

Adam says that things get better and life about the ups and the downs.

That, and realising that makes it easier to swallow some of the bitter pills that we need to.

“The next thing is that you are never alone – even if it feels like it,” Adam says, “if the people you are used to relying on are not reliable or are not available, there are others,”

Adam says the Westville community has supported him from his first days at Westville Senior Primary school, through Westville Boys’ High School, at six different universities and up to today.

“Westville is a powerhouse. Being part of it is epic. You have a network. Use it,” says Adam.

Adam says, “One of the most memorable lessons I learned at WBHS was from Jowaine Parrott.

After proudly putting on a brand new pair of running shoes, ready to go for an afternoon run at cross country training, Jowaine Parrott stopped me at the gate to Bowden’s.

She grabbed my hands and stood with her dirty takkies on mine, smudging them with mud.

At that moment I was devastated.

I still remember the cheeky smile she had as I ran off. It was one of those moments that stick with you.

“You have to get dirty to take big steps. You’ll never see a marathon runner finish with clean shoes,” Adam says.

He adds, “in their socks there will be blood and sweat,”

“Hard work gets you places. Never set out without the intention of getting dirty,” Adam says. 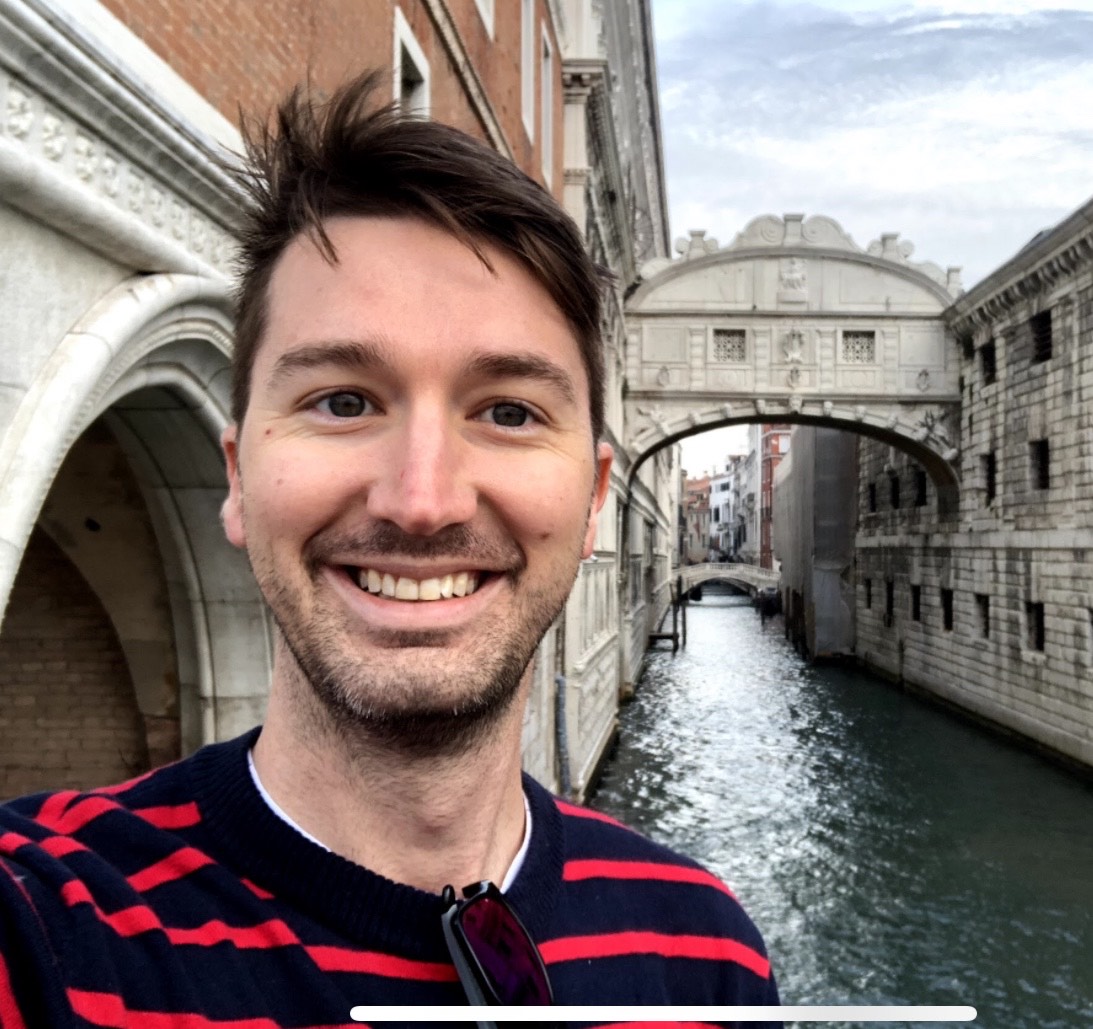