Thank you Gareth for your involvement in the Foundations’ “Tracked Learner Bursary Programme.”

“When Thando and I meet, it is a two way discussion. We work through problems and share ideas. If there is a problem we are struggling with, we brainstorm and map out the best route to a solution,” Gareth Hayes on his conversations with Thando Mzimela

Gareth Hayes greets cheerily, pointing out to his snow filled backyard as Thando teases him about the zipped up guitar bag.

A bit of banter about Instagram photos not equalling time spent strumming the strings slowly gives way to questions about how school has been, how Thando has been preparing for classes

“I have been counting down the days,” Thando remarks. He says, “I got my uniform ready”.

He specifically mentions his blazer, white as the snow in Gareth’s yard with it’s recent “icing” (in 2020 he was awarded Full Colours)

The conversation moves to debating. Thando discusses how he has been adapting to the difference between junior and senior debating as he steps to the podim of senior debating.

Gareth says he followed up with a friend who is a veteran debater and says the friend will be joining him and Thando on their next Zoom call.

From the rebuttal to the rehearsal, Thando and Gareth discuss Thando’s interest in film, media and drama.

They go over strategies for finding scholarships, getting involved in production work and building content.

Gareth shares a story about a friend who had featured in a short film on MNet many years ago and ended up working at Top Billing.

Gareth uses the story to illustrate how different roads can be used to reach the same goal.

At the end of Thando Mzima’s conversation with the old boy Gareth Hayes, they talk about what they have learned from each other.

“I learned how I disorganised I was at Thando’s age,” Gareth says,

He continues, “Thando has achieved so much, and knows where he wants to go.”

“Once I asked him what his goals are and he shared his screen to reveal a two pager answering my question. In matric I didn’t even use a proper book,” Gareth exclaims.

Speaking about what Thando’s conduct has taught him Gareth says, “dedication to all things, to be humble and to have so much potential,

Thando says , “through my time with Mr Hayes, I have been given guidance and found ways to discover my potential.”

Thando emphasises that the conversations with Gareth are about realising his potential.

“I came into this quite nervous , Mr Hayes has helped me realise that I am allowed to grow,” Thando adds.

Thando says, “I have learned that I should never sell myself short. But also to be true to myself.”

“When I started with Mr Hayes I wanted to be a lawyer. He encouraged me to pursue my passion,” Thando says.

Most of our conversations, helped me understand how far I could go

Gareth, thinking back 20 years says “I don’t want someone to be homework,”

A seasoned professional in executive coaching Gareth is aware of the transactional nature mentor-mentee relationships can have and has said he wants his seasons with Thando to be a conversation, a two way sharing of ideas.

Gareth says, “I want to be an enabler, to show the importance of having options available.”

“The old boys are a network that we are leveraging” and as a mentor Gareth says, “who you know and how you offer your mentee those relationships can offer access to the next tier of life”

“Life is quite cruel, we must follow our passion,” and Gareth says this is why he has encouraged Thando to continue pursuing his passion and expanding his outlook.

According to Gareth, “success is longevity in something, if you can stay in an industry , you have to have passion in it,”

Gareth says, “When Thando and I meet, it is a two way discussion. We work through problems and share ideas. If there is a problem we are struggling with, we brainstorm and map out the best route to a solution,” 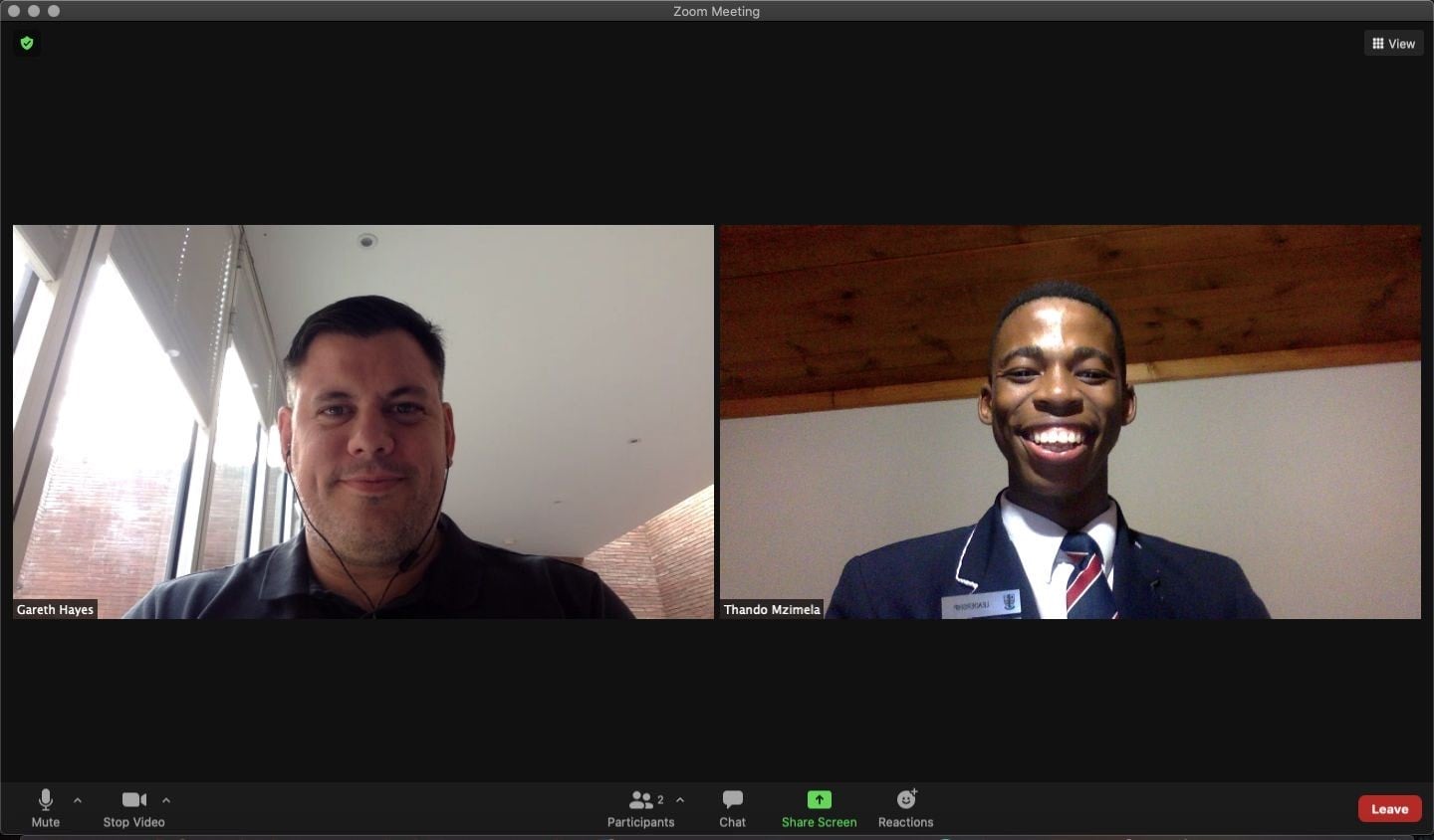