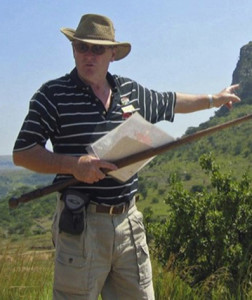 In the fifth edition of Conversations with Old Boys we chat to accomplished author and tour guide, Ken Gillings.  Ken, who matriculated from Westville High School in 1964, worked in sales for most of his life.  He retired in 2003 from his position as the national sales manager for a fruit processing company, and now concentrates on researching and writing about the interesting military history of Kwa-Zulu Natal.  Ken has also had an accomplished military career, and rose through the ranks to Regimental Sergeant Major.

“The School is amongst the top in the country and it is being led by outstanding teachers. Its results in recent years – whether in the form of academics or sport – makes the choice to attend the School a simple matter.”

Biography of Ken Gillings in Brief

The Battle of the Thukela Heights, Ravan Press, 1998

While they Kept the Flag Flying -The Relief of Ladysmith, Just Done Productions, 2012

Discovering the Battlefield of the Anglo-Zulu War, 30 Degrees South Publishers, 2013

Conversations: Who was your favourite teacher at school, and why?

Ron Warner, my History teacher. His method of presentation sparked my passion for this subject. He was able to relate to everyone in his class and he held me in awe with his description of the Battle of Isandlwana.

Conversations: Was there a defining moment or life lesson that you learnt at high school that has been useful to you in years since leaving school?

I could say that it was Hooke’s Law was the defining moment because I had a problem remembering it until Jack Perrett, the Science Master, took me down to the Headmaster’s office and gave me four cuts with the cane. I have never forgotten it since, but I haven’t a clue how I’ll use it nowadays. Flippancy aside, the strict discipline enforced at the school stood me in good stead for the future.

Conversations: What advice would you give to a primary school boy considering whether or not to attend Westville Boys’ High School?

The school is amongst the top in the country and it is being led by outstanding teachers. Its results in recent years – whether in the form of academics or sport – makes the choice to attend the School a simple matter. I have been impressed with the leaders that it has produced and the support that the Headmaster has given to his pupils. The management style appears to be based upon the school’s motto, ‘Incepto ne Desistam’.

“It is amazing to think that the entire school used to assemble daily in the quadrangle for prayers.”

Conversations: Considering that you attended the High School in its early years of existence do you have any memories that you would like to share with us about the challenges of those days?

In the 1950s, Westville was a small village and most families knew one another. There were definitely challenges to the availability of class rooms and the school expanded considerably under the headship of Mr Bowden. Most of the parents were working class people and we either had to walk to school or ride bicycles. Several of the boys had “buzz-bikes” and the Durban Corporation used to provide a double-decker bus service to and from Durban. I remember one day that the bus was low on fuel and turned into Stedmans Service Station. The roof was slightly lower than the bus, with predictable results.

It is amazing to think that the entire school used to assemble daily in the quadrangle for prayers. There we would be addressed by the Headmaster, followed by the teachers. Discipline was strict and strictly enforced. After assembly, we would line up outside the class rooms, while the Headmaster, Mr Bowden, or the Deputy Headmaster, Hector Commons, used to walk along the corridors slapping a cane against their legs and glaring at known stirrers.

Conversations: Do you have a funny story from High School that you would like to share with us?

There were several funny moments. One that comes to mind immediately was when we hung a fellow pupil up on a hook in her blazer at the back of the class. These were in the days when the High School was still co-ed. We waited to see if the teacher would notice. He did after a while. Fortunately the teacher had a superb sense of humour and he reacted accordingly.

Conversations: Describe for us what you do in your current career?

Ken Gillings’ Bush and Battlefield Tours keeps me from becoming bored. My tour groups have ranged from schools to senior military officers and British Royalty. My customer base has switched from 95% British tourists ten years ago to 78% South African tourists nowadays.

I enjoy sharing the passion for history that I developed at Westville High School. It all began with a battlefield tour that the school arranged in 1963. I think that tour sowed the seed for my present career.

Conversations: What advice would you give to a young person considering a career in tourism?

Go for it!  Nowadays tourism represents 8% of South Africa’s GDP and there is potential for growth. Start at the coalface by becoming registered as a tourist guide and work your way to the development of your own tourism enterprise. Oddly, I’ve done just the opposite and become a tourist guide towards the end of my career.

Conversations: Twenty years after the advent of democracy what are the challenges facing the recording and dissemination of the history of our country?

In the past, history was reflected in a somewhat partisan manner, but a true South African historian should present an unbiased account of our past. I believe that I have achieved that and now is the time to project the more recent events in a neutral manner as well. This applies to Government as well, of course.