Westville Boys’ High School (WBHS) has eight houses into which the pupils are divided for internal school sports and cultural competitions, and for delineating pupils into form classes in each grade. The number of houses has increased as the enrollment of pupils has grown through the history of WBHS and its predecessors.

The first two houses, Carr and Wandsbeck, were created in 1947.  This was during the days of the Westville Government School, which was a junior school on the site where WBHS stands today.  It catered for all grades up to Standard V, and formed the basis for the formation of the Westville High School, which opened its doors for the first time in 1955.  By 1961 all the infant and primary classes were moved offsite and accommodated in separate educational institutions.

Carr House is named after Miss Gladys Carr, the founder of the first school from which WBHS can directly trace its roots. Miss Carr, who was 21 years old at the time, opened a private school on 1 March 1935 in a church hall. Initially the school was regarded as a ‘farm school’, but became ‘government-aided’ by 1938. The school moved to Bernard’s House in 1941, the site of WBHS today. Miss Carr’s school grew substantially until 1944, when it was decided by the provincial administration to turn the school into a provincial school. The colour of Carr House is green.

Wandsbeck House is named after the original farm on which WBHS stands today. The farm itself covers much of what is today called the suburb of Westville. Among the first inhabitants of the area were German farmers recruited to grow cotton.  The name of the road leading up to the WBHS main gate is called Wandsbeck Road. The colour of Wandsbeck House is orange.

Cliff House was added in 1950 and was the only house added during the days of the Westville Government School, which succeeded Miss Carr’s private school in 1945. The House is named after Mr P.K. Cliff, the Inspector of Schools, who was a longstanding friend of the Westville Government School and its predecessor school. The colour of Cliff House is light blue.

Swain House was created in 1957, just two years after the formation of Westville High School. It is named after Mr C.E. Swain, a popular staff member and enthusiastic sportsman.  The naming of this House after Mr Swain is one of two tributes paid to this famous schoolmaster.  The School Bell, officially named the Charles Swain Memorial Bell, is also named after him. The colour of Swain House is red.

In 1978 two further houses were added, Hofmeyr House and West House.  At this time WBHS had been in existence solely as a boy’s high school for 13 years. Enrollment had continued to increase as the Borough of Westville expanded as a residential area.

Hofmeyr House is named after Jan Hofmeyr, a celebrated Member of Parliament and Cabinet Minister during World War II. Jan Hofmeyr Road lies adjacent to Bowden’s Field, the main sports field of WBHS.  Hofmeyr’s personal papers are housed at the University of KwaZulu-Natal as part of the Alan Paton collection. The colour of Hofmeyr House is yellow.

West House is named of Sir Martin West, the first Lieutentant-Governor and civilian administrator of the territory of Natal. He took up these positions in 1845 and served in these capacities until 1849. The Borough of Westville was named after him. The colour of West House is black.

In 2004 the final two houses that make up the current eight houses were added. WBHS had seen a substantial increase in enrollment over the preceding five years, increasing from a school of 950 pupils to almost 1200 pupils.

Bernard House is named after Mr and Mrs Bernard who bequeathed the building commonly referred to as Bernard’s House to the people of Westville for educational purposes. Miss Carr’s private school was moved to Bernard’s House in 1941. There is a memorial in the central quadrangular of WBHS that marks the 60th anniversary of education on the site that is today WBHS. The colour of Bernard House is grey.

Outspan House is named after the Outspan Tree, which also features on the badge of WBHS.  This tree, which once stood on the wagon route that is today Jan Hofmeyr Road, was the site that travellers used as their first overnight stop from Durban into the interior. The colour of Outspan House is royal blue.

Pupils where first delineated into form classes according to House membership in 1988.  Prior to that they had been delineated according to academic achievement. The new idea was suggested by the Head Prefect in that year, Craig Coombe. It was accepted on a trial basis by the Headmaster, Roy Couzens. The proposal proved to be a success and has remained in effect ever since then.

Swain House has won the trophy on 14 occasions. Cliff and Carr Houses have each won the trophy 8 times, and Hofmeyr and West have each won it on 3 occasions. Wandsbeck won the first ever edition of the Cock House trophy, but has never won it since. Outspan has won the competition twice, and interestingly won it in 2004, the year the House came into existence for the first time. Bernard House, which was also formed in 2004, has yet to win the Cock House Trophy.

The full list of Cock House winners through the years is: 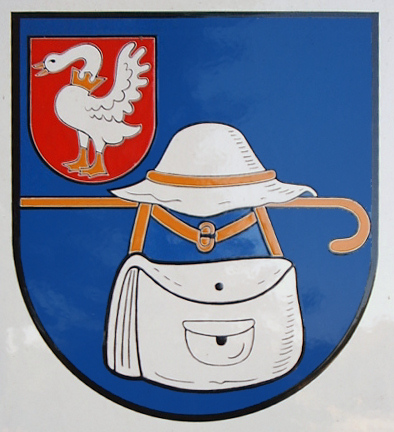 The Wandsbeck Coat of Arms