If there was ever a Cinderella story for business, this would be it.

From a Biryani Pot in his mother’s backyard, to a combined 120-ton capacity per day of emulsion mixers in a factory and property almost a kilometer long,  Yasheen’s story has so many intricate twists and turns and heart-warming moments that it’s easy to get lost in the narrative, and hard to précis his life into a few words.

His journey though, into who he is today, he believes started through his time spent at WBHS.

“Westville Boys’ High School, and you can quote me on this, has been instrumental in the development of Zeta Laboratories”.

“A large part of the success of our company has been because of the leadership I have, and that I have grown into. That is because of Westville Boys’ High. Within six months starting at high school, all the teachers knew my name, and not for bad reasons!”

“I really enjoyed a lot of my teachers, they taught me a lot about myself. If I had been to any other school, I don’t think I would have taken the same path in life”.

Yasheen admits he was a bit lost after matric, but he had excelled in Accounting.

“I thought this must be my calling”.

Having lost his dad in an accident shortly before starting high school, he felt it his duty to stay in the province to support his mother and two younger brothers. His older siblings had opted for careers and studying away from home.

With this in mind he passed his first and second years BCom at UKZN but by his third year, he knew deep down he didn’t want to do it anymore. And therein lies the second instrumental development.

“Westville Boys’ High School teaches you bravery, courage, and arrogance in a good way. You shouldn’t be a sheep and follow the queue. So that’s exactly why I quit studying”.

In his third year, his mother Bernadette, handed him a stack of his father’s formulations. “She waited to see that I wasn’t enjoying what I was doing and gave me this. My father was a very neat, meticulous man and he kept all his records perfectly”.

Yasheen’s dad Dino was a well-known cosmetic chemist and pharmacist in the community.

“When I was a kid, I would watch him in his pharmacy, in the back in his dispensary, mixing creams and things like that in little beakers and It was always interesting, but he died too soon so he never had a chance to teach me anything. But the way he left all his information, it’s as if he knew I was going to read his notes, explaining everything in great detail. I read through this whole stack of stuff my mother gave me, and I didn’t even know it existed!”

“At first it was so difficult decipher all these chemical and raw material names. For somebody who doesn’t know anything about it, doesn’t know where the stuff is from, you know, which companies to call to get all these ingredients, and I was only 21 years old”.

But he knew that he now wanted to try and follow in his dad’s passion for cosmetic pharmaceuticals.

“I would call these companies sounding like a 20-year-old kid, and a lot of them didn’t give me the time of day”.

Yasheen persevered, despite some hard and unhelpful conversations, and managed to secure samples.

“I made my first cream in my mother’s kitchen with her blender and when I saw it come together, I said this is what I want to do. It’s amazing when you heat up some waxes and you heat up your water and combine them and it forms this beautiful cream. This emulsion forms in front of your eyes in seconds and you see it and it’s a great feeling, and then to have people using it and enjoying it, that’s huge gratification”.

Yasheen set up a plant in his backyard, bought a small hundred kilo tank, a small mixer and a two-plate stove top. He used his mother’s biryani pot to heat up waxes and oils and made body lotions. These he sold to pharmacies in the CBD and despite being unprofitable, he was enjoying the process.

And so, the third instrumental development in his story came in the form of a former employee of his uncle, Mike Naidoo, who had taken over the running of a factory from his dad years before.

From the knowledge he gained from this, Mike  had opened a small operation in East London with nothing more than an ice-cream box for a till and boxes for shelves. He had billion-rand turnover cosmetic store by 2008.

By chance Yasheen’s mother had had a conversation with Mike, which in turn led to an opportunity being given, a contract to make private label brands for a chain of about 20 stores and eventually leading to opening his own company on a small premise in New Germany.

And from his first product, a foam bath for the Spar Group, his company has seen phenomenal growth to what it is today: 400 employees, 700 products, a bottling production company, and a fleet of trucks. His products include lines for Clicks, Pep, Spar, Shoprite, Ackermans, Servest, as well as the creation of the Biosol brand which was the largest sanitizer brand in SA during the Covid-19 pandemic and more recently for the Department of Health, Limpopo.

Yasheen’s twin brothers, Nikhail and Nishal are intricately involved in the manufacture of bottles for the company, also Westville Old Boys, having studied commerce at UCT.

He has won Clicks Private label supplier of the year out of thousands of suppliers 3 years in a row.

“Because of this we have never had to go out and look for business. Our growth has been so fast, it’s not that we wanted it to happen, it just happened organically because of external pressure that caused us to grow”.  From brief to shelf, his company takes three months, where other companies take years.

Add to this that Yasheen is keenly conscious of the environment and the impact industry has on it.

“For years I have been against the use of plastic, and there are so many alternatives now. In five to ten  years, we should have no plastic on the shelf”.

Clicks recently awarded Yasheen the contract for an eco-range based on his passion for this.

“We are always doing things to cut our plastics. Recycled plastic is used for packaging, we no longer shrink wrap products before boxing, and we have now invented a sachet of concentrate which when mixed with one liter of water makes one liter of lotion. This allows you to never have to buy single use packaging again if for every product you only every bought one bottle for mixing”.

“The saying goes we don’t inherit the earth from our parents, we borrow it from our children. We as a generation have to hand it down in good condition”.

From a stack of formulas to a multi-million-rand company. Yasheen says his dad’s base knowledge is still part of the business.

“His basic principles I still follow. If you have a strong foundation, the rest of it you just build on, so I feel that the initial literature that he left behind really formed the foundation for this whole business”.

And while he stepped out of an actual degree, in the thirteen years since taking a chance with his dad’s formulas, Yasheen has managed to do the work of a lawyer, a chemical engineer, a pharmacist and an accountant.

MAY I NOT SHRINK FROM MY PURPOSE 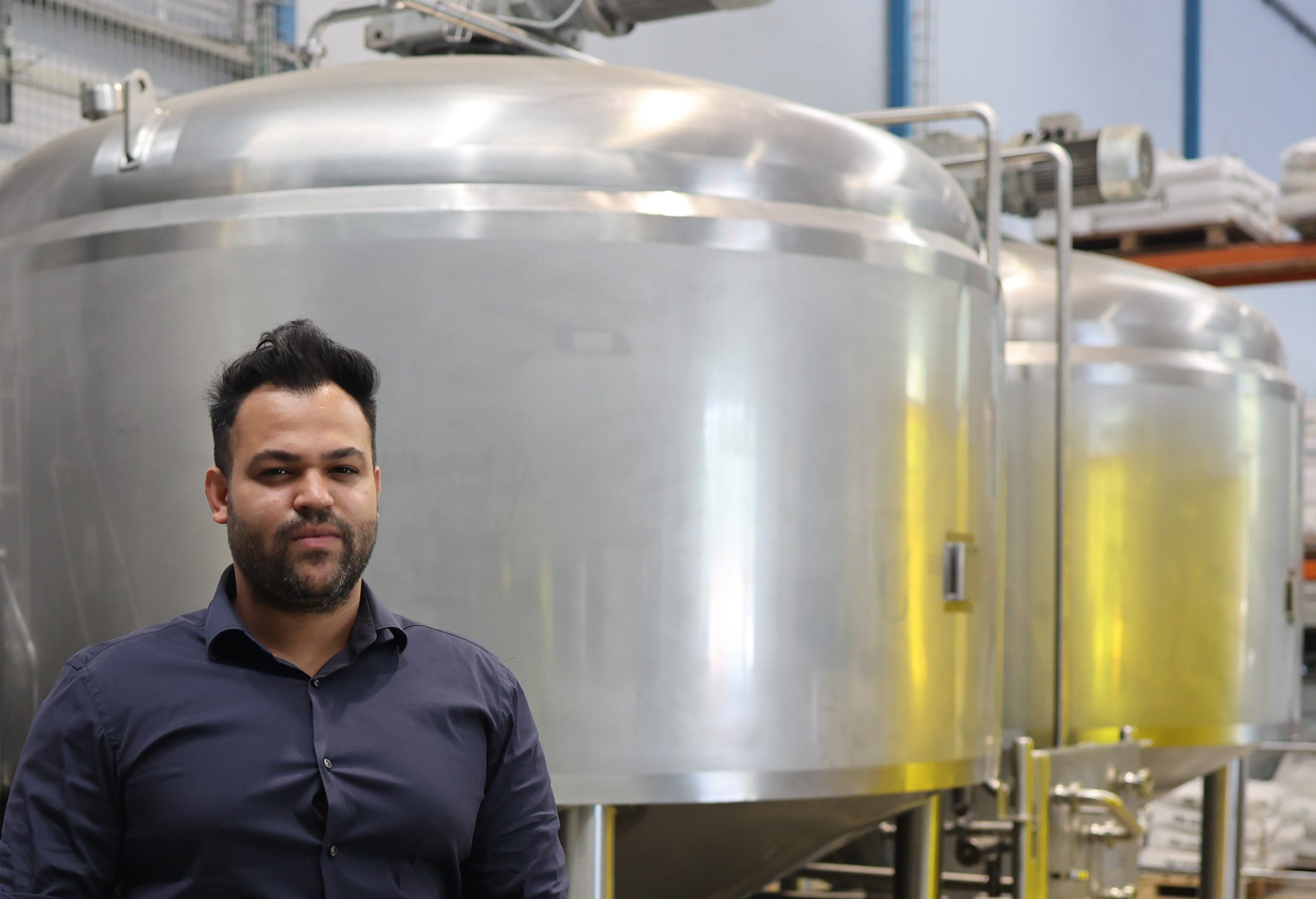 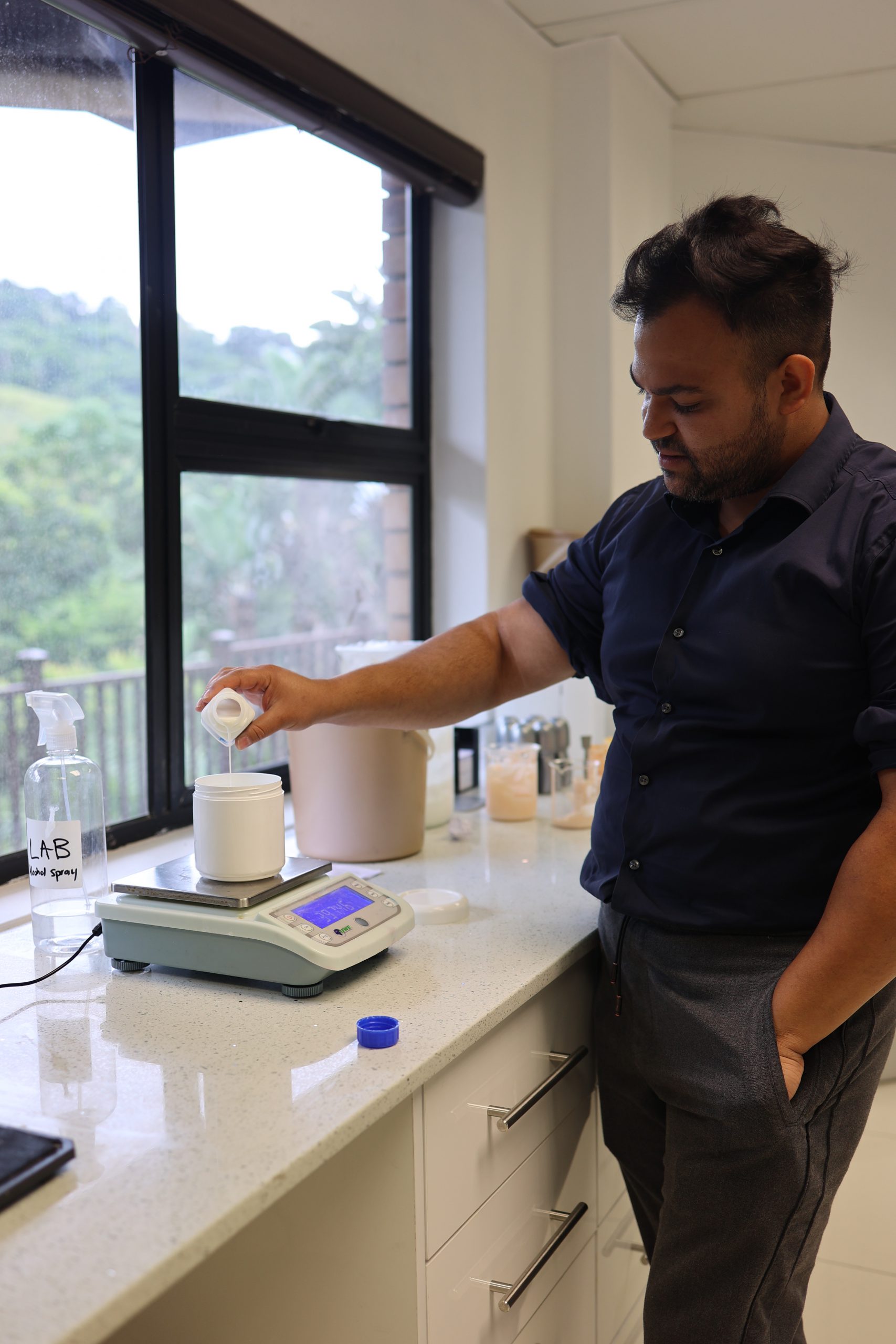 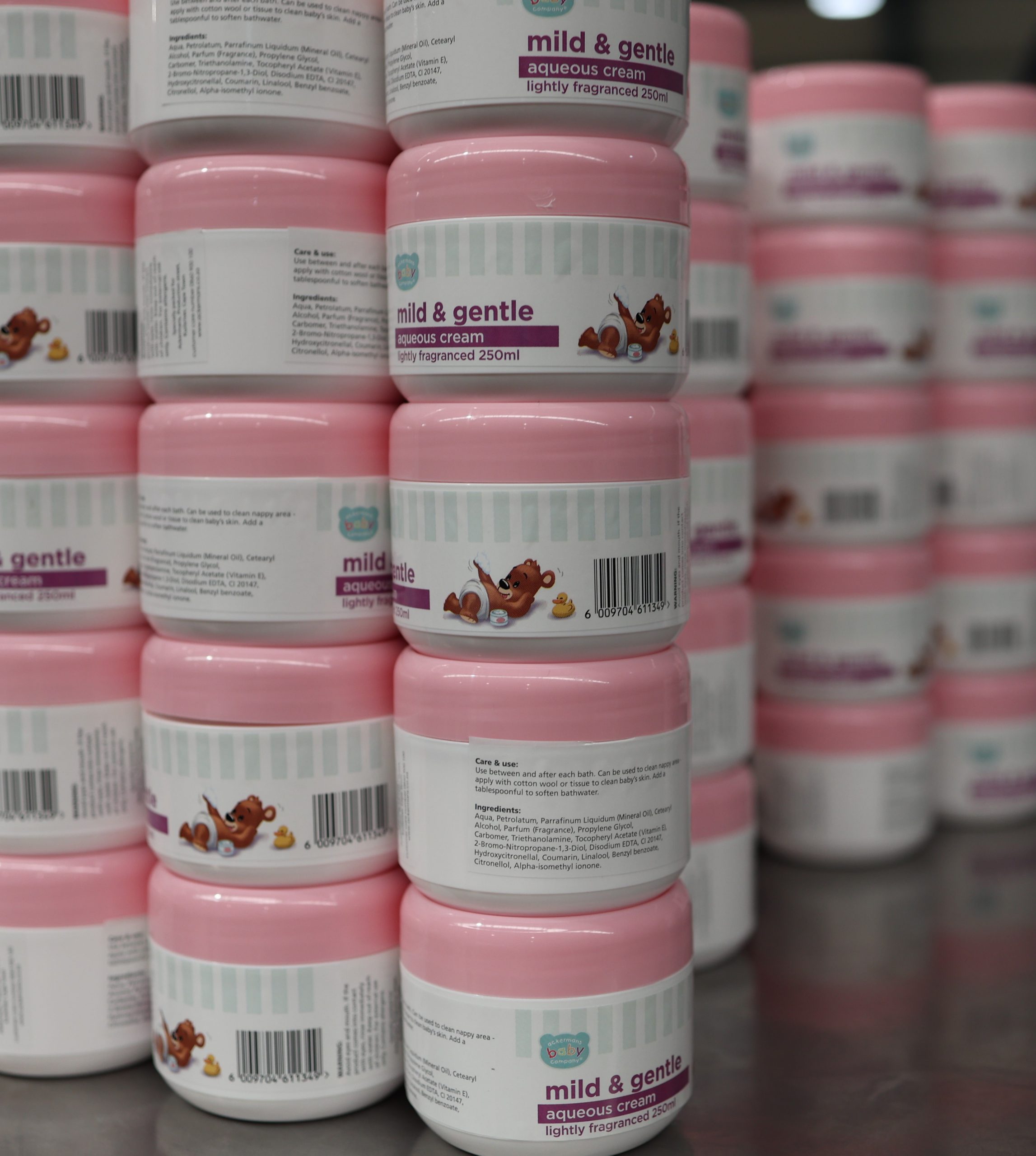